Diorama of a woman exploding

Before I launch into the recap of first quarter of relative failure I wanted to share the link to a short write up that Sierra Houk did about the Wrong Opinions About Movies Podcast that I am lucky enough to be on with my friend Matthew Bowers and my writing partner Alli Martin.  It’s great fun for me to be able to discuss movies with my friends on the internet, but it’s even more fun if other people get in on the conversation.  Today we recorded our Titanic episode and in the coming months we’ll be doing a whole slew of Batman episodes with special guests in preparation for The Dark Knight Rises.  If you like movies and wrong opinions give us a listen!

So, back to March!

Flubs: That is a depressing number and I know it.  I would feel bad about it, but most everyone I know also had a bad March, word-wise.  Divided we blunder, together we procrastinate!  March was a rough month in general mentally, which isn’t an excuse, but it is part of the problem.  And now that I’ve rooted out where I am I can start to rebuild and get back to the important things.  The writing things.

Looking back at my Impossible 2012 Plan, this month I have failed at: completing Volunteer Vampires, finishing the rough of my parts of of The Steampunk, and submitting a second poem for publication.  I haven’t started a second short story either, but I’ve decided I need to try and be less ADD  about everything that directly affects the rest of my life.   We’ll see how that goes.

I will continue to be ADD in the day to day, though, lest you’re concerned I’ll stop derailing conversations with ridiculous non sequiturs.  Worry not!

Follow Throughs: But I DID start the second round edit of my friend’s manuscript and submit a poem for publication.  In case you missed my yelping when I got the news, that poem was accepted!  I will have a steampunk themed poem in the fall issue of a small online poetry zine–which I will link back to when it goes up–and I am very excited about it.  The non-writing people around me don’t understand my excitement, because it’s not “really being published”, but I don’t expect them to.  My writing friends understand and I feel personally like it’s a good start and a small victory in the war with myself, so I’m excited.  I wrote a poem!  People didn’t hate it!  I now need to carry that ego boost into a forward momentum and see what other things I can churn out that people won’t hate.

And onward to April!

I am going to finish the draft of Volunteer Vampires THIS WEEK, even if it kills me.  Alli knows where to submit it for me posthumously if I do die.  Barring that unfortunate possibility I am also going to write at least two more chapters of The Steampunk and edit half of my friend’s manuscript.

I can do this.  Deep breaths.  One railway tie at a time.  Or at least, that’s what I imagine my hard work charm telling me. 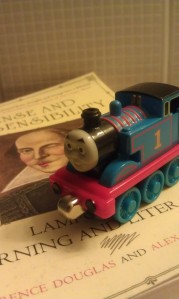 i am not a poet, plans with a capital p, writing, wrong opinions about movies